A fundamental habit which will improve your decisiveness in daily life is the habit of thinking in buckets.

Thinking in buckets means quickly categorizing the possible outcomes of a complex situation into a small number of possibilities.

For example, the game Craps involves throwing a pair of dice and betting on the outcome. There are 36 possible outcomes when you throw two dice, and each of those 36 outcomes is equally likely. But from the perspective of the final sum of the two dice, there are only eleven possible outcomes, namely the sums 2 through 12, and you can easily calculate the odds of each sum. 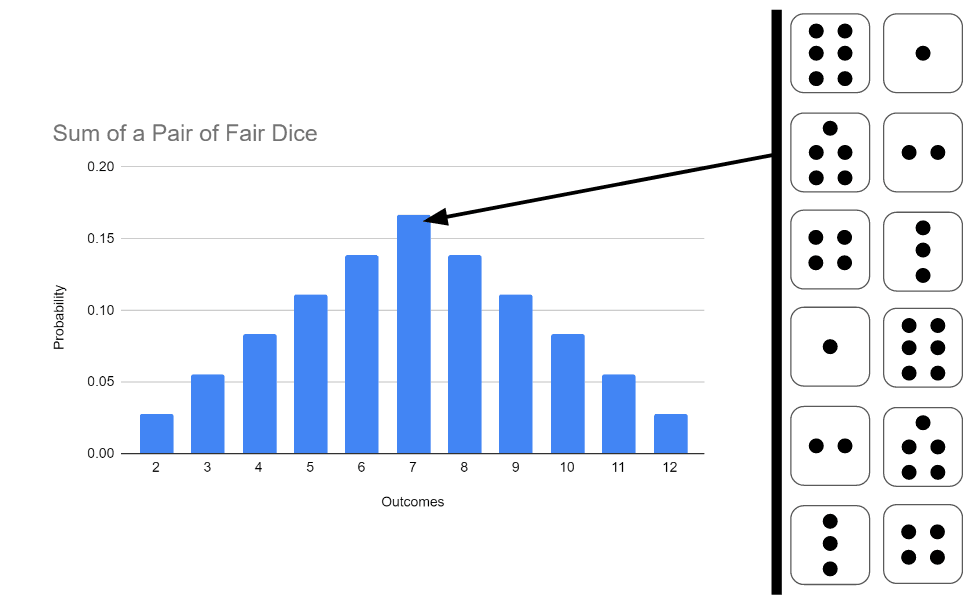 You can easily see that the number 7 is the most likely because there are six different ways of getting a 7, each of which is equally likely. Meanwhile there is only one possible way of rolling a 2. From the perspective of thinking about the game of Craps, it’s obvious that we want to bin the possible outcomes into the right number of buckets — no more, no less.

Keep in mind that we're talking about binning the outcomes, not the choices. The possible choices in a game of Craps would be how much money do you bet and upon which squares you place your bets. Articulating choices is an important but totally different step (and one that relies on a different technique). Remember: binning the ugh is about identifying the outcomes — the possible things-that-could-happen regardless of your own actions and choices.

The real world is always more complicated than games, but it can often be made simpler from a binning point of view. You generally want to make a decision or prediction problem as simple as you possibly can, breaking down a distinction into only two possibilities if appropriate. It is much easier to think about a problem when you have defined the specific possible outcomes that you most care about. With practice, you can cultivate this habit until it becomes automatic.

This skill is applicable across many daily circumstances. For example, if you’re trying to pick a stock to invest in, you might settle on three meaningful possibilities:

Instead of trying to imagine all the twists and turns that a business negotiation might take, you could predict whether the sale will take place, or not. If you’re trying to be more punctual, then instead of predicting what time you’ll arrive at your destination, you could ask whether you’ll be late or early. These simplifications turn confusing questions with an apparently unlimited space of outcomes into simple sets of bins, which are much easier to grapple with.

Breaking possible outcomes into bins can also help clarify your thinking about emotionally charged topics. Vague anxiety is often an excellent indicator that you need to break your worries down into distinct bins. That sense of “ugh”, that internal feeling of aversion to even thinking about a topic, is a flag indicating that you should apply this technique. One main source of anxiety is a lack of clarity surrounding possible outcomes. In fact, in most situations where you have experienced decision paralysis, you will find that the root of the problem was a failure to even specify exactly what the possible outcomes were!

Thus, the basic mental skill, which I use daily, is to reflexively ask myself the question: What exactly am I worried will happen? How many possible outcomes are there here? Can I reduce my vague cloud of worry into two or three vivid possibilities? And once I have done that, I can use the tools of probabilistic reasoning to take action. 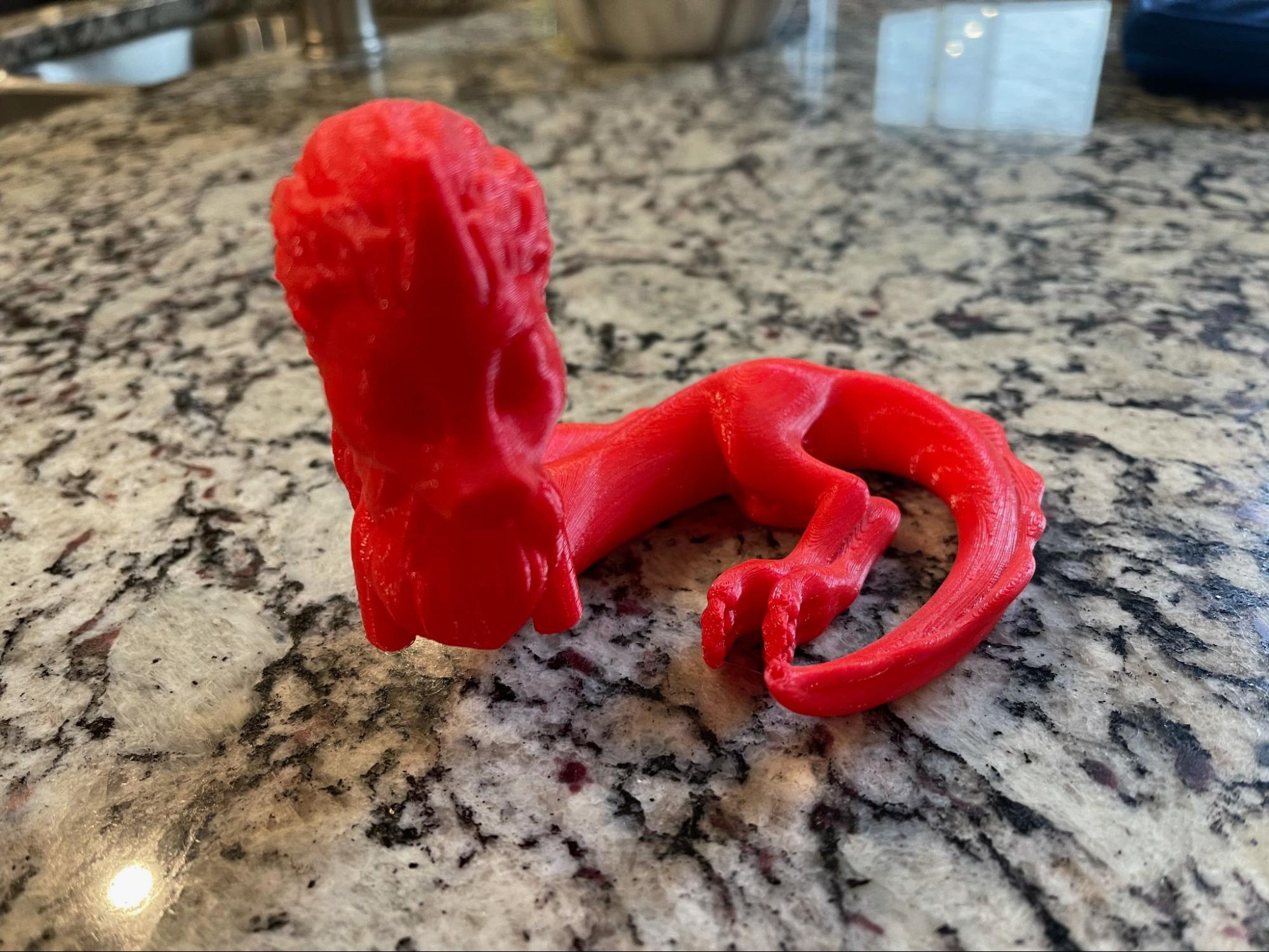 Let’s discuss an example, help explain the sort of thing I’m talking about.

I was stuck on a particular 3D printing project for a few days. I’m trying to make a Sisu dragon for my daughter. The last iteration of this part came out poorly. Sisu lost her arms, as you can see here. This version was damaged due to being too weak to survive the process of removing the support material.

I hadn't moved forward due to a vague sense of worry and frustration. Faced with the unformed thought of repeating my failure and disappointing my daughter again, I avoided thinking about the problem. Which is a great policy if your goal is failure. This is exactly this sort of stupid, minor, yet unclear obstacle that blocks our progress on a hundred different fronts in our daily lives.

So what do I do? I asked myself what is causing my indecision. After thinking about it for a moment, I conclude that it’s a worry that I’m missing something. That I’ll waste another load of filament and 24 hours of printer time due to another unnoticed mistake. On the other hand, it’s possible that the part comes out fine due to my tweaks.

Projects like this are time-consuming enough to trigger a strong “ugh” response if you aren’t sure of the outcome. But I had now explicitly thought of at least two distinct possibilities, which is the first step in solving the problem. Just going through this simple process of breaking the outcomes down into two possibilities had dissolved my cloud of worry. I could see the two outcomes:

Having binned the possible outcomes of the situation, I was able to notice that wasted filament is not a big deal.

I recalibrated my printer settings, restarted the project, and created a better Sisu dragon.

This may seem like a simple, low-stakes problem — and it is! But I got stuck on it for several days, even though there wasn’t much of a decision to be made here, just a hurdle of confusion to overcome. A problem doesn’t need to be complicated and weighty to benefit from being broken down into bins.

In the first round of this course, the sorts of decisions people faced in their lives often looked like: Should I get a haircut? Should I take my car into the shop to investigate that weird noise? What should I do about an issue regarding some college credits? Should I keep working with my business partner? You can sense that these are all mundane problems which are nerve-wracking because the instinctive flinch reaction — the "ugh" — prevented people from breaking down the problem into possible outcomes.

It may seem like I’m belaboring what seems like a very simple technique, but I think you’ll find that most decision-paralysis in your own life can be traced to a failure to take this first basic step. If you take nothing else from the Guild's material on decision theory, then please be sure you at least absorb this technique.

So, in conclusion: when you sense an “ugh”, bin it.