This week you will begin with some review and exercises, and then move on to a Bayes problem in your own life.

We have, until now, treated probabilities as subjective assessments made by the decision-maker and used to make better decisions in uncertain situations. We have not addressed how to treat your probabilities when new information is discovered. What do you do when you gather new evidence that has some bearing on your decision process? You should update your prior probability to better reflect the reality that you observe. The rule by which you should nudge your previously held probability after a relevant observation is described by Bayes' Theorem.

You will often see Bayes' Theorem expressed this way:

Bayes' Theorem can be used for situations involving many possible outcomes and even continuous variables, but for this exercise we will focus on simple binary problems. The most succinct derivation of Bayes' Theorem I have ever come across, applying to a binary situation, is contained in this image: 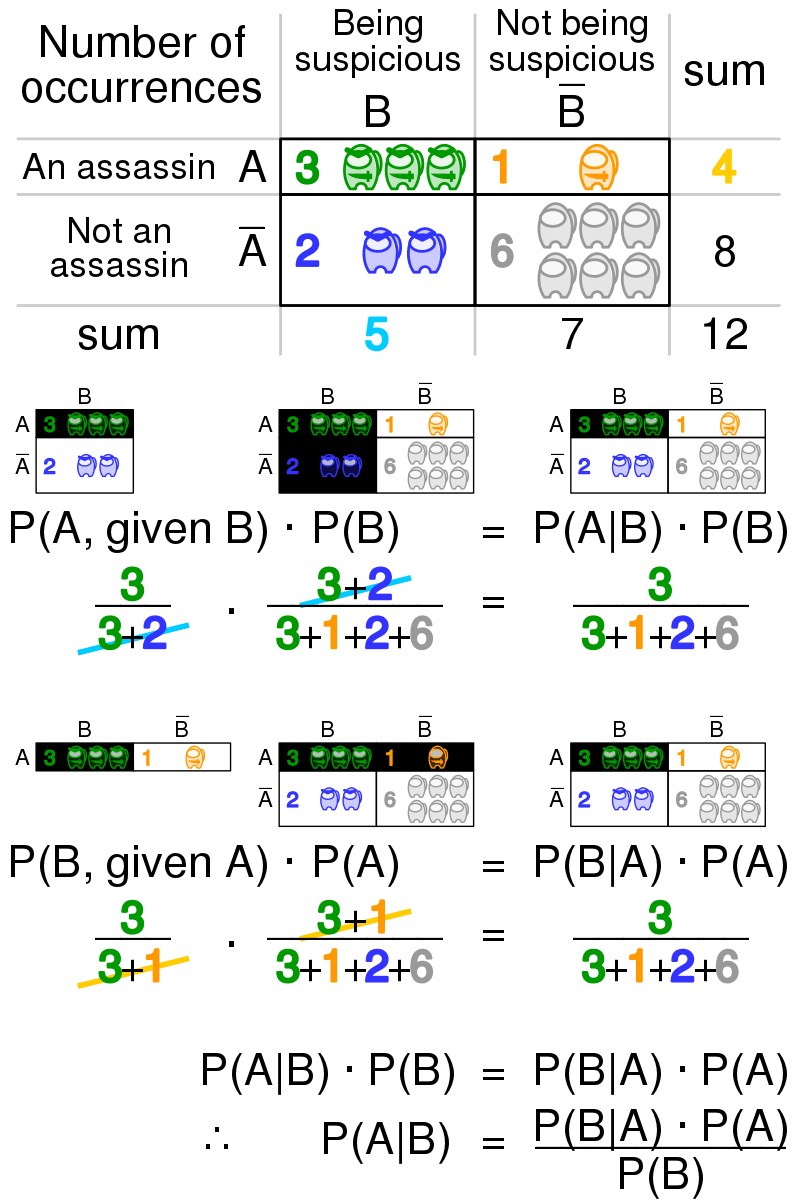 Take at least a minute to examine the image quietly before moving on.

For reference, refer to this version of Bayes' theorem, which is more directly helpful in situations where B is a binary variable:

The only difference between this form and the previous one is that P(B) has been expanded and made explicit. This simply makes it easier to calculate. We will now work through an exercise that will help you internalize how all this works.

Open the Mystery Coin spreadsheet , make your own personal copy, and screenshare it with your cohort. Then read the following to your cohort:

A mysterious stranger offers to play a game with you. They hold out a cloth sack, and tell you there are 100 coins in the bag.

The stranger reaches into the bag and draws out a coin at random and says, "Every time I flip this coin, I will throw away one coin from my bag. Every coin remaining in the bag when you tell me whether the coin is fair or biased, will be yours." And the stranger begins flipping the coin.

Before moving to the spreadsheet, spend 5 minutes by the clock discussing a solution approach. Move on when 5 minutes are up.

Start with the tab Definitions. Your cohort will collaboratively fill in all the definitions that are grayed out, given the provided starting definitions as examples. Split up the task however you like.

Check your answers with the answer key when you're finished with this step, and if there are any serious disagreements, discuss them until satisfied that you understand. Minor differences in wording are fine.

Move to the tab Starting Probabilities and collaboratively fill in the grayed out cells. Again, one answer is provided to get you started.

Check the answer key after you have come to an agreement, or if agreement cannot be reached.

If you reach consensus, or after ten minutes, move on to Problem Setup (2) and check the answer.

How would the rest of the sheet be extended? You may attempt to do this on your own, or discuss the approach as a group.

For the remainder of the 40 minutes allotted to this section, examine the final sheet, Dynamic Sheet, an interactive worksheet that simulates the problem dynamically. You can change the red cell from Trick to Fair to change the behavior of the sheet. The sheet uses the RAND() function, meaning every time you change something in the sheet, the values will update. Try to come up with a collaborative answer for how many coin flips it would take to feel relatively certain that the coin is either fair, or a trick coin. There is no firm answer to this, but helpful questions to ask might be:

Take a five-minute break. Stand up from your computer, stretch, get some water.

Note. The tasks below should be performed sequentially for each member of the cohort. For example, your first cohort member should complete Personal Situation and then Shared Situation. Then your second cohort member completes both, and so on.

This week, we will not be working on a personal decision tree. Instead, each cohort member will think of a recent situation to which Bayes Theorem could potentially be applied. Write down Bayes Theorem for the situation, defining all the variables appropriately. Write down your initial probability estimates and calculate how the update should be performed.

Return to the cohort session and share the Bayes problem from the previous task. Describe your thought process in choosing your variable definitions and your probabilities, and show your result. The group should provide feedback, especially if something seems to be a mistake.

If there's time remaining, return to the Mystery Coin sheet and experiment with the values in the green cells, exploring how the dynamics of the problem change as the assumptions are altered.

If you want to become truly comfortable manipulating Bayes' Theorem, try rebuilding the spreadsheet from scratch.

This section contains links and information that Guildmembers found helpful.

You must be signed in to write a note.
Sign In